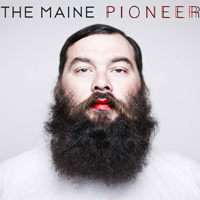 I’m going to review music the same way that I review books (because I’m lazy).

4.8/5 The Maine is my favourite band and I love them to death. This album is tied with ‘can’t stop won’t stop’ by them.

The Maine is a punk/pop/rock band from Tempe Arizona. The band have been together and playing music for over 5 years now. They have three albums out-can’t stop won’t stop,black and white, and their lastest album-pioneer. They also have many EPs and have won a few awards. The band members are-John O’Callaghan (vocals), Jared Monaco (lead guitarist), Kennedy Brock (back up guitarist), Garrett Nickelsen (bass), and Pat Kirch (drums).

I never, ever, ever, ever liked Some Days. I disliked that song a lot, it was the only song that I did not like on this album. But it wasn’t until I saw them in concert and they played that song that I finally loved it. After almost 6 months of skipping this song, I still knew every word to the song and screamed my heart out at their Pioneer north America tour. I also don’t like the cover, the man looks odd to me and creeps me out. I wish they went with something more attractive like the meaning and photograph they did for Black and White.

To this day, I love every song on this album, I love how it makes me want to dance and go wild like those people you see on TV dance when they truly don’t care about anything anymore. This whole album is about facing the things you fear and owning up to what you did wrong. I love the message of this and the new direction they chose to go with this. My favourite songs on this would have to be Misery, I’m Sorry, and Thinking of You. I cannot wait for them to release more music for the whole world to fall in love with because their music is all about having fun and realizing that times are hard and how ‘some days, they just feel like razorblades’. I would recommend this Album to anyone who likes All time low, Mayday Parade, Pierce the Veil, You me At Six, and Sleeping With Sirens.