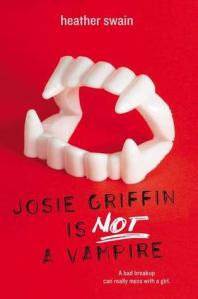 Josie Griffin is NOT A Vampire By Heather Swain

When former good girl turned rebel Josie Griffin gets busted for what was in her mind perfectly acceptable revenge on her cheating dog of a boyfriend, she lands herself in anger management therapy. It could be worse: it could be juvvie, or she could be a zombie cheerleader like the rest of her former friends. But there’s something strange about therapy–these are not normal kids. There’s the wannabe ladies man with a weird accent, Johann; the blindingly gorgeous Helios; Avis with his wild dreads; and Tarren, the sprite of a girl with a wicked temper. And all of them keep talking about “powers.” Josie knows that has to be impossible, but strange things start happening, and nothing weird ever happens in Indiana. After all, there’s no such things as vampires, werewolves, Greek gods, or fairies . . . right?

This book isn’t a book for me. I honestly thought I would love it, it sounds funny and like a very interesting, lighthearted read. Instead I got a disorganized book that is full of dumb and boring things. In the beginning, everything was going great, it was interesting and even a little funny. That quickly changed once I reached chapter four or five. The characters are all stiff and seem like complete jokes. Nothing interesting happens in this book that really caught my attention. It really annoyed me.

The writing style is just all over the place. It’s very disorganized and confusing, acting more like a whiny girl’s diary than anything else. At one point, she’s trying to convince her new friends to help her figure out what to do about the HAG situation, then a few chapters later, Josie is the one who needs to be convinced to help. That just doesn’t make sense at all. Something that really annoys me about this book is the romance. It is very shallow and annoying. They barely know each other but they’re talking about each other like they’ve known each other forever instead of two weeks? No. That is stupid and wrong. But what annoys me even more is that Josie thinks she’s some kind of investigator when she isn’t. Not even close. The book doesn’t help her prove that she’s an investigator because there are little to no clues that keep readers guessing or makes this book a little more complex. The ending sucks because nothing interesting happens. Just a few heart-to-hearts between some of the characters.

I really like that this book uses difficult words instead of only using ‘easy’ words like, contrite and ostentatious (just to name a few). I like the beginning because it is interesting and funny at first. I wouldn’t recommend this book because I don’t think very many people would enjoy this book. It’s very disorganized and stiff instead of the funny read you would have expected.