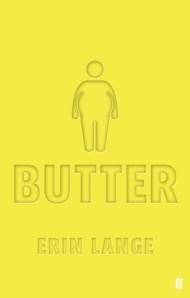 A lonely obese boy everyone calls “Butter” is about to make history. He is going to eat himself to death-live on the Internet-and everyone is invited to watch. When he first makes the announcement online to his classmates, Butter expects pity, insults, and possibly sheer indifference. What he gets are morbid cheerleaders rallying around his deadly plan. Yet as their dark encouragement grows, it begins to feel a lot like popularity. And that feels good. But what happens when Butter reaches his suicide deadline? Can he live with the fallout if he doesn’t go through with his plans?

First of all, I would like to thank the Publisher, Faber and Faber for giving me an ARC of this book to review. Thank you so much! Really appreciate it! All right, now for my review.

I must admit that Butter has mentioned a few problems that teens face today. Throughout the book, Butter narrates a story about being neglected by his father and self-conscious about his body image because of his  romantic interest, Anna. There are many problems with the book, like, the romance because it isn’t believable nor did it make me feel sorry for the characters. Butter suffers from many things and although he learns a valuable lesson, the book is only an OK read.

There are many things that I dislike about the book. Many of the characters are very bland and boring, easily forgettable with a stereotypical story line. There’s a huge amount of clichés that make the message of the story uneasy to remember. Most of the clichés are about the popular kids and how they react to Butter and his situation. Because of this, it makes the story harder to read and/or like. I found myself gritting my teeth every time I finished a chapter because it is a very typical high school movie instead of a teenager’s life. Saying this, the ending is very predictable. I hated how the whole night ended because it’s far too obvious and I felt apathetic towards it all.

There are a few things that I do like about the book though. While Erin Lange writes a story about an outcast teen, the writing is enjoyable. The beginning of the story caught my eye because it’s funny yet simple. The idea for this story is interesting because it has a twist to the average telling of a teenager’s life and what they go through today.

A creative idea yet, it’s poorly executed because it doesn’t pull emotions to stay in a reader’s mind. I don’t think I would recommend this because it is a pretty tough read, even without boring characters, it isn’t an issue that can be taken lightly.