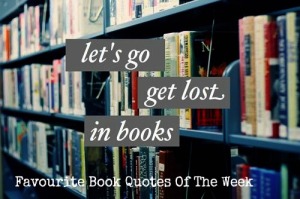 Shatter Me by Tahereh Mafi

1. But it’s nearly impossible to beat gravity when no one is willing to give you a hand.

2. Truth is a jealous, vicious mistress that never ever sleeps, is what I don’t tell him. I’ll never be okay.

3. “You’ve suppressed all your rage and resentment because you wanted to be loved,” he says, no longer smiling. “Maybe I understand you, Juliette. Maybe you should trust me. Maybe you should accept the fact that you’ve tried to be someone you’re not for so long and that no matter what you did, those bastards were never happy. They were never satisfied. They never gave a damn, did they?” he looks at me and for a moment he seems almost human.

4. He grins and hobbles forward. “You know, you’re pretty sexy for a psycho chick.”

The Unbecoming of Mara Dyer by Michelle Hodkin

Favourite quote: “No,” I said, louder this time. “I mean asscrown. The crown on top of the asshat that covers the asshole of the assclown. The very zenith in the hierarchy of ass,” I said, as though reading from a dictionary of modern profanity.

1. I’d experienced this before, these waves of resolve. They never lasted and usually ended in an epic binge. But when they came on, they came on powerful, and I was convinced I’d never eat another bite.

2. It was one thing to be giving up on myself, but moms were supposed to believe in you to the very end.

1. Pain was life now. No hope remained. The pain smothered it along with everything else that reeked of happier times.

3. That was what I’d longed for but couldn’t find. I wanted someone else to know…And care.

I wanted someone I could say goodbye to.

7 thoughts on “Favourite Book Quotes of The Week#18”