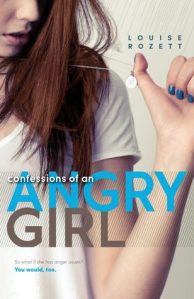 Confessions Of An Angry Girl (Confessions#1) By Louise Rozett

1. I’m livid all the time. Why? My dad died. My mom barely talks. My brother abandoned us. I think I’m allowed to be irate, don’t you?

2. I make people furious regularly. Want an example? I kissed Jamie Forta, a badass guy who might be dating a cheerleader. She is nowenraged and out for blood. Mine.

3. High school might as well be Mars. My best friend has been replaced by an alien, and I see red all the time. (Mars is red and “seeing red” means being angry—get it?)

Here are some other vocab words that describe my life: Inadequate. Insufferable. Intolerable.

(Don’t know what they mean? Look them up yourself.)

Everyone gets angry. It’s a known fact that we all break down and snap once in a while. What I was expecting from this book was an out of control, I-don’t-care-about-you kind of protagonist. What I was not expecting was a whiny, sad protagonist that mostly only cared about a boy and beating up a cheerleader. But even saying this, I still liked the book because it is funny and the characters (for the most part) are enjoyable. I just wish that it had a bit more bitchiness to it.

The beginning is pretty slow, Rose is trying her best to get over her father’s death while starting high school. With this being said, it’s pretty obvious from the start that Rose is not going to snap at every person she sees (or anyone at all). A few of the characters are stiff and choppy, I feel like Louise Rozett was trying so hard to get Rose well-rounded that she forgot about the secondary characters. I had a very hard time believing the relationship between Rose and Jamie as a real, genuine thing because it happens very suddenly and out of the blue instead of the readers getting eased into it. As for the humour of the story, Confessions of an Angry Girl only gets seriously funny and a bit crazy near the end of the book. Throughout the story, there are only petty, boring things happening compared to what the synopsis has made me believe what this book was going to be about.

What I like about this book is that most of the characters are really enjoyable. They don’t necessarily jump off the page but they did hold on to my attention and make me laugh. Another thing I like is that at the start of every chapter there’s a word and a quick definition about it as well as an insight as to what the upcoming chapter is going to be about. I think this is clever because it made it a bit harder for me to put the book down.

Confessions of an Angry Girl is a misleading title for this book. Yes, Rose is a bit angry but its exaggerated far more than it should be because she’s mostly sad, lonely, and confused. I recommend this to anyone looking for a light read with a touch of sadness, also who are looking for a high school styles book with evil cheerleaders in it. I’m really hoping Confessions of an Almost-Girlfriend is where Rose decides to step up her game and brings her bitchy, angry attitude out.

One thought on “Book Review: Confessions Of An Angry Girl (Confessions#1) By Louise Rozett”