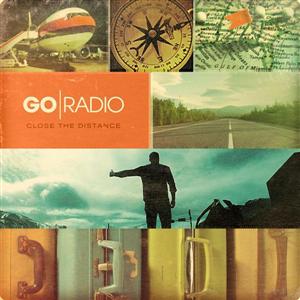 Close The Distance by Go Radio

Go Radio is still on the top of their game. Maybe not as high as they were with their first album, Lucky Street. But it’s the second album that either makes or breaks a band. And with Go Radio, Close The Distance definitely makes this band. They are going to make it big, maybe even bigger than bands that have been playing with each other for decades.

What I don’t like about this album are the things that are the most ‘in’ nowadays with music. It’s been around forever yet, it seems, everyone wants a piece of that, “Oh oh oh,” bit now. And when I say everyone, I really do mean everyone. For some bands and artists, it works (sometimes) but with Go Radio and their songs, Lost and Found, Go To Hell, and, I Won’t Lie the change of tune is sort of sudden and too hard to wrap my head around. Although I like these songs, I just can’t stand this about them at all.

I love the transitioning between the verses’ and chorus’ in all of the songs because they flow so smoothly together whether they speed up or slow down. Everything just fits and goes well together. Many of the songs have easily relatable lyric like, Close The Distance, Go To Hell, Things I don’t See, as well as, The Ending. These songs talk about romance and the old days that everyone can stop and remember about their own lives. This is another thing I love about this band. They can seamlessly relate to people in such a heart-felt way. In the song, Things I Don’t See, there’s a really cool guitar solo that not many bands seem to have. I also like that the band added the right amount of voices/sounds to their songs, Collide, I won’t Lie and Lost and Found that it doesn’t drown out the songs. Instead it makes the songs better rather than took away from them.

Close The Distance isn’t a huge success for me. I feel like the band takes two steps forward and one step back because they grew and matured with their experience and lyrics (sort of), yet, decided to go with a much more poppy sound. I’m not saying that all of the songs should have been edgier and angry like, Fight Fight Fight or Any Other Heart. But, it would have made the album a lot better if they stuck with some punk/rock tunes as well as pop tunes to keep all their fans happy.

Songs On The Album