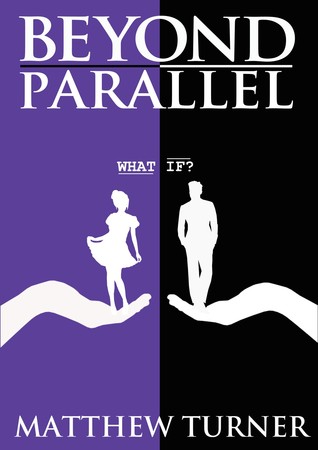 Beyond Parallel by Matthew Turner

Bella and Clark are two young twenty-somethings, finding themselves in a chaotic and crazy world. One craves love; the other avoids it. Will they find one another, or will a single what-if moment send them down different paths?

In the same mould as Sliding Doors, Uncertainty, and Smoking/No-Smoking, Beyond Parallel flips between two parallel tales. One follows Bella and Clark as a couple, the other as if they never meet.

It’s incredible how a small, everyday decision can affect how you look, where you live, the people you love, and who you become. We could all live a billion lives, but we’re only given one. Is it all a game of chance, or are Bella and Clark meant to be?

First of all, I would like to thank the author, Matthew Turner  for giving me an ARC of this book to review. Thank you so much! Really appreciate it! All right, now for my review.

Usually, I don’t read New Adult novels because I can’t really relate to the characters. But I was intrigued by Beyond Parallel and the concept of alternate realities. It’s so very cool! And this novel didn’t disappoint me but it didn’t impress me either. With so much going on I felt a little left in the dark during some chapters and bored or excited with others. Between chapters, six months goes by which is a lot of time for things to happen. Nonetheless, Beyond Parallel is a book that readers will enjoy.

Bella and Clark are such a cute couple. The only problem I have with them is that the beginning of their relationship is the classic case of insta-love. Their relationship happens so fast and maybe this is how adults do things, I’m not sure, but it feels very forced in the beginning. It would have been nicer if readers were eased into their romance instead of shoved into it. I also don’t like Bella. At all. Throughout the story, for both stories in fact, she’s annoying, whiny, and very self-centred. She expects her best friend, Alex to help her through a breakup (fine), be her wingman (fine), but to also just talk about herself and then whine about it without asking Alex about his problems (No way). It’s really annoying how flat and boring all of the secondary characters are also. They have little life to them.

A big element in the novel is travelling and finding that special missing something or someone. The story starts off in Thailand where Bella and Clark both are and I liked that Matthew Turner used Thailand because it’s a really exotic, fun place with some breathtaking sights. Beyond Parallel has two stories inside of the book, one with Bella and Clark as a couple and the other one is without Bella and Clark as a couple. For me, I really enjoyed reading about Bella and Clark being a couple because I got to read about both sides of their story instead of just one. They both start freaking out over little things and their hardships as a couple that they are forced to over come shows how realistic any kind of relationship is and I liked that.

Overall, Beyond Parallel is a good read full of romance and a few tough parts to get through. Just like any relationship and although the middle is very slow and most of the characters are quite flat, I did enjoy the story. Especially the ending, it’s so cute and Awe worthy! I recommend this to anyone who enjoys new adult or romances with some travelling going on.

2 thoughts on “Book Review: Beyond Parallel by Matthew Turner”