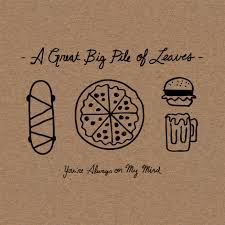 A Great Big Pile of Leaves is an indie-rock band from Brooklyn, New York that formed in 2007. Since then, the band has released four EPS-Living from the Living Room, The Fiery Works, Boom, and Making Moves as well as two albums-Have You Seen My Prefrontal Cortex? and You’re always On my Mind. Band members are: Pete Weiland (Vocals, guitar), Tyler Soucy (Drums), Tucker Yaro (Bass), and Matt Fazzi (Guitar).

With summer already over, I think this may be the album to remind people of it. This band isn’t one that I would normally listen to but after listening to this album I’m shocked that I’ve never heard of them sooner because their music is so light. Possibly lighter and warmer than a song by an unknown artist has ever made me feel which is why they deserve every good thing that goes their way.

Something that I couldn’t overlook are the lyrics because of how forgettable they are. In every song, I had a hard time believing or even caring what the singer’s singing about because it’s so uninteresting and boring.

A Great Big Pile of Leaves does a nice job by keeping a steady mood going throughout all of their songs. I’m so used to songs that speed up or slow down that when I listen to ones that keep the same pace and momentum all the way through, I just have to appreciate in Snack Attack and Back to School. The most memorable thing about You’re Always on my Mind has to be the guitar solo in Back to School because it really caught my attention as well as my heart. Another thing that I loved about this album are the use of overlapping vocals since they are really nicely done in most of the songs.

You’re Always on My Mind is an album full of super light, breezy, and just all around fun songs that make it a great summer album. And even though fall/autumn is upon us, it’s never too late to have one last summer night to remember. I recommend this to anyone who’s starting to miss summer. My favourite songs on this album are: Back to School, Egocentrism, and Fun in the Sun.