I use the plagiarism checker at Grammarly.com because like a poutine with shredded cheese, it’s not as good as the original! 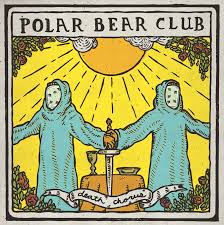 Polar Bear Club are roughly a new band to me. Their music is so pop punk/punk rock that it’s a bit scary. Normally, bands like these usually end up starting in pop punk but then change their sound years later whether if it’s for the best or the worst. Polar Bear Club’s dedication towards pop punk is respectable and encouraging, and Death Chorus is proof of that.

These days, I’m a real stickler when it comes down to vocals. In Death Chorus, vocals are very strong, don’t get me wrong, but I would have loved some songs to have a darker tone to them. But other than that, my biggest problem with this album is the middle where songs start to sound the same without any of them being easily distinguished.

Before the middle, the choruses in the beginning are really tight and smooth like in Blood Balloon and So I Buy. WLWYCD has a tremendous build-up with the drums and guitar slowly coming back in. The drumming is awesome to the extreme in So I Buy as well as For Show. Siouxsie Jeanne is one of the softer songs on the album and it’s sadder and of course about love, but I still love it.

Overall, Death Chorus by Polar Bear Club is an album that pop punk lovers will enjoy. They seem to have a solid reputation and release very solid album, and I can’t wait to hear more from them.