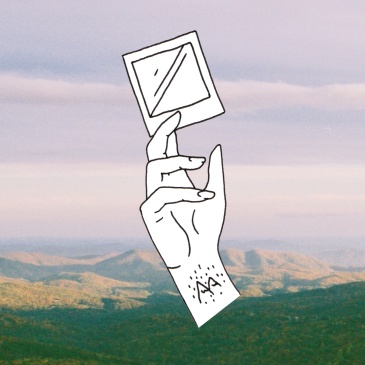 Sinai Vessel is: Caleb Cordes (vocals/guitar), Daniel Hernandez (bass), and Joshua Herron (drums). They are from Charlotte, NC / Chattanooga, TN and formed in 2009.   One night after his band Sinai Vessel had finished playing a set, a newly won fan came up to Caleb Cordes and described his band as “punk for sissies.” For some reason, it’s stuck. “I don’t know why that’s resonated with me so much,” he laughs, “but it really has.”

Really, Sinai Vessel isn’t as sissy as they seem. After all, their 2013 EP Profanity is full of honest, overwrought moments—verses that climb into clamoring melodies, trickling lows interrupted by turbulent and gushing highs. It happens on “Cuckhold,” where veering chords  crash into each chorus, and on “Drown Around,” as Cordes’s husky voice floats on whirling guitars before they shatter, becoming jagged, jangling shards above which he must roar.

First of all, I would like to thank the publicist, Colin Czerwinski for giving me a copy of this album to review. Thank you so much! Really appreciate it! All right, now for my review.

It’s a funny thing the way the mind interprets sounds. It’s all just noise at first, you can’t decipher anything and then somehow, with some effort (or a lot, depending on what you’re listening to) everything starts to make sense little by little until it’s not just noise anymore. It’s art. It’s music and it’s amazing. Profanity is an example of this. It starts off as just noise with nothing making sense at all but Sinai Vessel quickly organizes themselves and throughout the album, it shows that they understand their music yet are still trying new things and will hopefully work on a few of their flaws. Overall, I am definitely digging this album.

What bugs me the most might have to be a part in my favourite song, Cats at about the bridge where it’s so soft and quiet and then it stops just to start-up again in a very rushed, sloppily done way. Changing from slow and quiet to fast and loud in roughly two beats is always tricky to do and almost never works out well and it really doesn’t here. Another problem that sticks out is the screaming and how raspy it is. I’m all for mixing clean vocals with rough vocals however in Drown Around it’s all over the place. It’s obvious that the vocalist, Caleb Cordes isn’t very comfortable with his range and this needs to be worked on as well the weaving in and out of both clean and rough vocals in a way that they’re smooth without any disjunct motions.

Nonetheless, I love Cats and I’m not saying that just because I have one. The song in general is slow but builds up well, they prolong it as long as possible and I really like that, I also love the volume of the vocals, how it starts off quietly, barely louder than a whisper all the way to half yelling half singing. Daniel Hernandez does a great number on this track as well, with the bass riffs sticking out at just the right time to add that really nice deep sound. Cuckhold is different from the rest because it has a rougher feel to it and this element will reside well with many listeners as well as the fast pacing drumming from Joshua Herron that’s steady. Moreover, my favourite thing about Flannery is the lyrics. They’re simple and catchy, light yet dark at the same time, I always love songs that have double meanings because the meaning can change every time you listen to it. The lyrics that are stuck in my head are: “Just good country people with bad city hearts/white wool for our charm and a wolf’s bite marks .” There are a few ways to interpret this phrase and it’s one of my favourite lyrics this year.