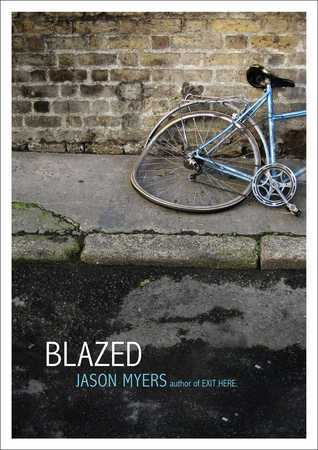 Jamie uncovers life-changing secrets from his past when he’s sent to live with a father he’s never met in this gritty novel from the author of Exit Here. and Run the Game.

Jamie is invincible when he is high. His anger, his isolation, his mom’s manic mood swings—nothing can shatter his glass castle. But one brutal night upends everything, leaving his mom broken and Jamie betrayed.

Sent to live with a father he’s never met, Jamie is determined to hate the man he blames for his mother’s ruin. And he blocks out the pain with drugs, fierce music, and sweet, sweet Dominique. Except the more time Jamie spends at his dad’s, the more his mother’s scathing stories start to unravel. Who is he supposed to believe? And how much will he have to sacrifice to uncover the truth?

First of all, I would like to thank the publisher, Simon Pulse for giving me an ARC of this book to review. Thank you so much! Really appreciate it! All right, now for my review.

If you take away the shitty parents, all of the drugs, the romance and made the protagonist older, have siblings, less talented, and changed the setting, Blazed would pretty much be The Catcher in the Rye. Jaime is told to be this insanely smart and talented person and while he is mostly talented, I don’t think he’s that intelligent. If anything, he’s judgemental and a complete douchebag despite his circumstances. He calls everyone who doesn’t listen to indie bands and alternative rock, ‘phonies’ and ‘fakes’ (sound familiar?). He discriminates against women, saying that ‘we’re all just the same. stupid bitches that are out to destroy everything. Cold hearted whores, all of them’ (I’m paraphrasing but he says something along the lines.”   I’m sorry, but I can’t believe this book. It’s annoying in almost every way and half the book is completely useless.

First off, the writing style is choppy and confusing with nothing properly explained. There aren’t enough flashbacks to make the relationship between Jaime and his mother seem realistic and caring. Another problem are the characters and how lacking they are. Sure, they have some cool traits sometimes but for the most part, they’re underdeveloped and forgettable with close to no redeeming qualities just like the book itself. Everyone listens only to rap and indie bands, do a shit ton of drugs and then complain about how phony the world is. What’s even worse is how Myers sets the world up. San Francisco is a huge place, it’s not possible for every character to know and love every single band and every single book that’s mentioned here. It’s just not.

There is very little that I liked about this book. I spent so much time reading it, I had to find something that made up for the many days that I had lost. The chapters are very short. I also liked the bands that are mentioned, I have found a few new bands that I like. That’s all. Nothing else makes this novel a good read.

Blazed was such a wild card for me. I went in excited, the setting is wild and confusing. I would have been fine if it was only the writing that was that way. Unfortunately, it’s the whole book and I had very little patience for it but I somehow finished it. I hated it and I don’t recommend this book to anyone.