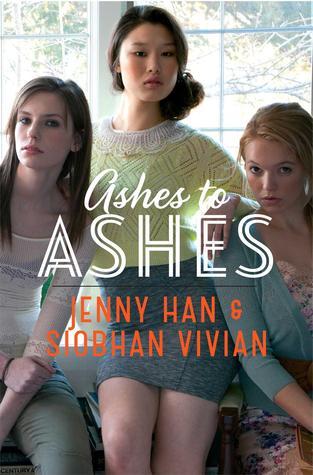 New Year’s Eve ended with a bang and Mary, Kat and Lillia may not be prepared for what is to come.

After Rennie’s death, Kat and Lillia try to put the pieces together of what happened to her. They both blame themselves. If Lillia hadn’t left with Reeve… If Kat had only stayed with Rennie… Things could have been different. Now they will never be the same.
Only Mary knows the truth about that night. About what she is. She also knows the truth about Lillia and Reeve falling in love, about Reeve being happy when all he deserves is misery, just like the misery he caused her. Now their childish attempts at revenge are a thing of the past and Mary is out for blood. Will she leave anything in her wake or will all that remain be ashes?

First of all, I would like to thank the publisher, Simon & Schuster Books for Young Readers for giving me an ARC of this book to review. Thank you so much! Really appreciate it! All right, now for my review.

Ashes to Ashes, the final novel in the revenge driven Burn for Burn series has final come to an end. And boy, is it a crazy ride. With the girls still reeling from the events that took place in the second book, Fire with Fire, everything seems strange. The girls are on completely different pages with each other and it’s not a good thing. Mary has officially lost her sweet girl nature that readers saw in the first and a little of the second book and is now psycho. Lillia is still an innocent flower but without being that innocent anymore, her role in many things take a toll on her and especially her relationship with Reeve. Kat seems to be the least one that’s ready to throw in the towel and I think that’s why I love her the most. She’s funny and seems to look on the bright side and keeps fighting. While they all go through their last few months of school, they all have to really figure things out and I loved how unpredictable the story gets to keep people in the dark.

Near the beginning of the book and for the whole series it seems, is that the books start off fairly slow and then slowly pick up speed until the very end. It’s a pretty good build-up however, I don’t like how long it took me to be engrossed into the book.

This series has other consistent qualities that are shown to be good things like the short chapters. In Ashes to Ashes, the chapters are so short that it’s hard to put the book down. “One more chapter,” quickly turns into, “might as well finish the rest of the book even though it’s five am in the morning.” It also helps that the writing  is addicting and the characters are well-developed that I easily knew whose chapter I was reading without even thinking about it. Adding onto what I said about the characters, they are great. They’ve really grown up since Burn for Burn and it truly shows in their demeanour and the way the speak about things. Also, the relationship between Lillia and Reeve is so cute! I liked it in the other book but I loved it in this one! It’s all ups and downs, highs and lows and sooo unpredictable. I honestly thought that in the end, things would end up different between them but I still liked how Han and Vivian decided to go with it. Moreover, the ending! The penultimate chapter especially! It’s all freaky and messed up and awesome! There’s so much suspense, will Mary forgive Reeve? Or will she make him suffer the same way she did? I loved how everything went, especially with the girls and Reeve, the way he questions his sanity and his life. I felt how realistic everything became and I was really happy with how it all ended. It’s pretty crazy, not gonna lie.

Han and Vivian have come so far with this trilogy. The girls all started out with blinded rage and naive minds towards most things to grown ups who understand just how risky it is to get revenge instead of giving forgiveness. Some people are really shitty, end of story. However, some people are shitty because they are dealt that hand and then they try their best to change it. This is evident with Reeve especially and I think that people who didn’t like him before will start to like him now. I recommend this series to anyone who loves revenge driven plots, a bit of romance, and killer twists!

5 thoughts on “Book Review: Ashes to Ashes (Burn for Burn#3) by Jenny Han and Siobhan Vivian”