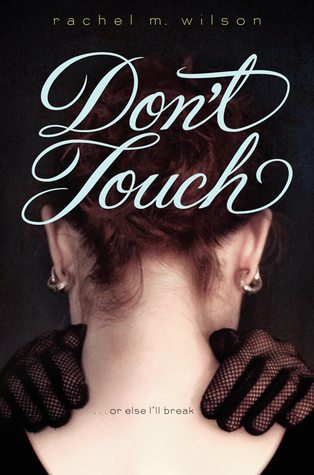 Step on a crack, break your mother’s back,

Touch another person’s skin, and Dad’s gone for good . . .

Caddie has a history of magical thinking—of playing games in her head to cope with her surroundings—but it’s never been this bad before.

When her parents split up, Don’t touch becomes Caddie’s mantra. Maybe if she keeps from touching another person’s skin, Dad will come home. She knows it doesn’t make sense, but her games have never been logical. Soon, despite Alabama’s humidity, she’s covering every inch of her skin and wearing evening gloves to school.

And that’s where things get tricky. Even though Caddie’s the new girl, it’s hard to pass off her compulsions as artistic quirks. Friends notice things. Her drama class is all about interacting with her scene partners, especially Peter, who’s auditioning for the role of Hamlet. Caddie desperately wants to play Ophelia, but if she does, she’ll have to touch Peter . . . and kiss him. Part of Caddie would love nothing more than to kiss Peter—but the other part isn’t sure she’s brave enough to let herself fall.

First of all, I would like to thank the publisher, HarperTeen for giving me an ARC of this book to review. Thank you so much! Really appreciate it! All right, now for my review.

For many people, touching others or being touched really freaks them out. Even for myself, there are times that I cringe whenever a friend comes in to give me a hug which isn’t as severe as what Caddie has however, it does make her easy to relate to. Rachel M. Wilson’s début is quite touching, (no pun intended) and obsessive disorder that has gone too far and a friend who is intent on proving that it’s not everything. Don’t Touch is a lovely story that I really liked with characters that are hilarious and kept my entertained.

Although Don’t Touch is a great debut, it does have a few flaws for instance, the romance. I really hated just how big of a role it plays in the book because for half the book, it’s the reason why the plot keeps moving. I wanted Caddie to get out of her comfort zone not because she has a crush but because she misses and needs her best friend. Another problem that I had with Caddie is how much she rushes through talking about her dad. I get that talking about someone who has hurt you is very hard, but the only way for a reader to completely understand the pain is by telling us a few stories about it, about the past and the memories that were shared, yet I never got the chance to experience this because it’s rarely showed.

Anyway, I really could connect with Caddie on most things, she’s realistic and her story is quite touching, something a I think most kids want when their parents split up. The way and process that Caddie uses to play the role of Ophelia as well as to get through life is amazing and beautifully done in a way that’s pretty moving. Moreover, I liked her group of friends because they are so funny.

Don’t Touch is a story about a girl with an illness. Believe me, I know how much of an overused story idea this is but Wilson takes a different approach that make it this book refreshing. I didn’t feel too annoyed with it. I recommend this to anyone who likes this story idea or is interested in books about plays.