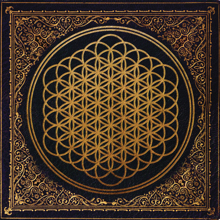 Sempiternal by Bring Me the Horizon

Bring Me the Horizon are a British metalcore band from Sheffield, Yorkshire that formed in 2004. The band have released 4 albums-Suicide Season, Blessings, There is a Hell, Believe Me, I’ve Seen it. There is a Heaven, Let’s Keep it a Secret., and Sempiternal. The group currently consists of lead vocalist Oliver Sykes, lead guitarist Lee Malia, bassist Matt Kean, drummer Matt Nicholls and keyboardist Jordan Fish.

Never judge an album by an artist’s past work. It’s a simple rule yet I find myself always doing just that. Which is why reviewing this album is something I never thought, never imagined I would ever find myself doing. Yet, here I am. By far, this is their best album yet and that’s probably because they finally listened to the world and made a very smooth transition from hardcore to post-hardcore. To be completely honest, I’m still not a fan of their music, in general, but Sempiternal has made Bring me the Horizon one that I will watch out for once they start releasing new music.

For anyone who has listened to a few of these songs already, or have seen some of the titles (track list is below!), It’s obvious that this album is a heavily religious album. And not in a, ‘we love God, he showed us the way.” But in a mocking way with Ollie Sykes screaming lyrics like-“FUCK YOUR FAITH!/No one’s gonna save you!/FUCK YOUR FAITH!/There’s no hope for us/We speak in tongues”. I’m not a religious person however I do find some of these lyrics rude and offensive to many people no matter what they stand for.

Sempiternal is full of great intro especially in Can You Feel My Heart where the techno beats clashes wonderfully with the guitars and bass. Now pair that with some extremely relatable lyrics (non religious) in And the Snakes Start to Sing, Sleepwalking, and Seen it All Before. I also love how the album is full of many keyboard pieces that really add to the songs, even in the slightest way.

Bring me the Horizon has always been known as that band that could be better if only they changed their sound. With loyal band members that enjoy making music together, sometimes, when a band changes their sound, it’s for the best and not for the worst. It only depends on the band and whether they are doing it for the right reasons.