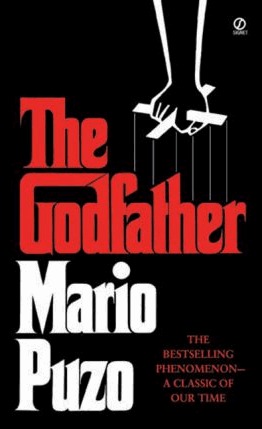 The Godfather by Mario Puzo

Almost fifty years ago, a classic was born. A searing portrayal of the Mafia underworld, The Godfather introduced readers to the first family of American crime fiction, the Corleones, and their powerful legacy of tradition, blood, and honor. The seduction of power, the pitfalls of greed, and the allegiance to family—these are the themes that have resonated with millions of readers around the world and made The Godfather the definitive novel of the violent subculture that, steeped in intrigue and controversy, remains indelibly etched in our collective consciousness.

I started this one because I loved the movie. The Godfather is just about fifty times better than the movie. With the novel being split up into relatively small books on individual characters, it’s action-packed with perfect pacing, seamlessly switching between multiple perspectives so readers get a full depiction on the characters. Seriously could not put it down.

Despite the large amount of love and respect I have for this novel, a few things didn’t add up for me. There is so much time is spent on lesser important secondary characters. An example would be the ridiculous amount given to Johnny Fontane, whom is a celebrity. His book in the novel doesn’t justify his role in the novel since it is so small.

Nonetheless, I love everything else. It’s very fast-paced with cleverly written dialogue. The book on Don Corleone is by far the best as it helps paints a beautiful picture of him as a realistic person and character. Timeframes are well put together, a lot of time has passed between a few of the books yet it feels like nothing has passed at all. More specifically, the writing is extremely smooth despite it being in third person which only adds to the story and gives it more diversity.

I know why everyone calls this a classic read. The best of the best, because it truly is. Everything is so realistic and intense, even people who don’t enjoy classics will have to make an exception for this one. It’s just that good.